Srinagar: The Jammu and Kashmir Committee for Fixation and Regulation of Fee of Private Schools (FFRC) on Wednesday directed all schools in the valley not to charge annual fees for the period from November 2022 to March 2023 following the change of academic calendar by the Government.

Managements of all the private schools “are restrained from charging and collecting annual fee for the period November 2022 to March 2023. Any breach of this order will result in initiating action according to law,” FFRC Chairman Justice (retired) M H Attar said in an order.

The FFRC order was issued in response to Tyndale Biscoe and Mallinson School, and two other affiliate institutions, asking parents to pay annual fee for the five-month period as the current academic session had been extended by virtue of the government order. The Jammu and Kashmir State Board of Education used to conduct annual examinations for classes 10, 11 and 12 for students hailing from Kashmir and some parts of Jammu region in the months of October and November.

However, a government order last month aligned the academic calendar of all schools in the Union territory with the rest of the country. The FFRC directive said that during an interaction with the managements of these four schools, it was made clear to the schools that in view of the government order the new admissions will commence from the month of March of the calendar year.

“It was thus impressed upon these authorities that the school managements’ notice to the students to pay annual fee for the months November 2022 to March 2023 is legally not sustainable and the authorities in these circumstances should withdraw the notice,” it said. 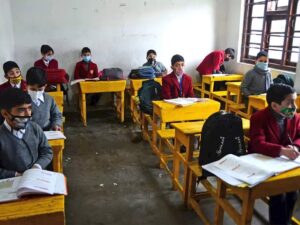 “It was made clear to the authorities of this school management that academic session cannot be stretched beyond 12 months period, which now starts from April 1 and ends on March 31 of the calendar year. The period of five months commencing from November 2022 to March 2023 being not part of the academic session, the students cannot be asked to pay annual fee for the period,” it added.

(Except for the headline, this story has not been edited by Careers360 staff and is published from a syndicated feed.)